Marjoram is a perennial herb originating from the Mediterranean region and a highly concentrated source of health-promoting bioactive compounds. In ancient times, Greek physicians believed that Marjoram Essential Oil was the ultimate antidote to poison. According to Greek mythology, Aphrodite, the goddess of love, was a huge fan of this herb, which led to it being used to make love potions. Marjoram Oil has been recorded as far back as Ancient Egypt. It is well famed for its healing properties as well as its ability to help people cope better during the grieving process. Marjoram is known as a symbol of joy and happiness in ancient cultures due to its many positive uses and so they called it “Joy of the Mountain”. In the 16th century, Sweet Marjoram has strewn on the floor of houses thanks to its potent and intoxicating scent that managed to mask unpleasant smells. Marjoram has been used in culinary dishes. In Germany, this herb is known as the “Goose Herb” for its traditional use in roasting geese.

1. Cooking and Culinary Benefits: can be used to spice up stews, dressings, soups, and meat dishes instead of dried Marjoram.

3. Calming Properties: Used topically and aromatically, it has a positive effect on the nervous system.

4. Have a Warming Effect on Both Mind and Body: It soothes tense muscles after exercise and is beneficial for occasional simple nervous tension and can help encourage relaxation before sleep.

Let customers speak for us

Bought this lovely set of placemats and matching runner yesterday..looove the color, design and quality of fabric..added a much needed splash of color! Loved the quick delivery,too..next day!

The runners and placemats' colors are amazing and joyful. I love the the quality of the prints and the fabric. They are much more prettier than the images.
Honestly perfect. 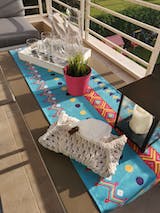 Purchased the fitted sheets. Everything is good - size, quality. Looks really nice on the bed. And service is great! Highly recommended!

I’m so satisfied with this purchase. Got it together with the bedsheets to complete the set. Good quality and looks so elegant. And service is great. Thank you a lot Patchouli team